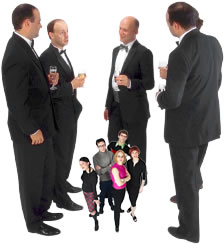 It’s the latest big deal in publishing: Big publishers are being sued; accused of using the ‘agency model,’ to keep prices of eBooks artificially high. Amazon, the world’s largest bookseller, is complying but only offering agency terms to the Big Six publishers. But in spite of all the brouhaha, independent publishers don’t need to worry themselves about it.

Certainly, Amazon has well-founded concerns that if they don’t meet the terms of their largest suppliers, they could lose the right to distribute their eBooks. Not only would that be costly, it would dilute Amazon’s strategy for the Kindle; namely having the world’s largest selection of popular, desirable eBooks.

But small publishers—especially self-publishers—operate under an entirely different set of business conditions. While the judicial system referees the conduct of the publishing industry’s big players, other market pressures are more deserving of indie publishers’ attention.

Filed in the U.S. District Court for the Northern District of California, the lawsuit alleges that the publishers and Apple colluded to increase prices for popular e-book titles to boost profits and force e-book rival Amazon to abandon its pro-consumer discount pricing.

The firm believes that Apple was involved in the scheme. The complaint alleges that Apple believed that it needed to neutralize the Kindle when it entered the e-book market with its own e-reader, the iPad, and feared that one day the Kindle might challenge the iPad by digitally distributing other media like music and movies.

What Michael Cader reports in Lunch is that publishers have worked out agreement with Apple to switch from a “wholesale” model to an “agency” model for ebook sales. The wholesale model imitates the physical world: the publisher “sells” the “book” to an intermediary (could be a retailer like Amazon or BN or a wholesaler like Ingram) based on the publisher’s established retail price and a discount schedule. Then the purchaser will re-sell that ebook at whatever price they like. When publishers offered discounts that were the same as the physical world discounts, they partially subsidized retailers who wanted to offer much lower ebook prices to consumers.

The “agency” model is based on the idea that the publisher is selling to the consumer and, therefore, setting the price, and any “agent”, which would usually be a retailer but wouldn’t have to be, that creates that sale would get a “commission” from the publisher for doing so. Since Apple’s normal “take” at the App Store is 30% and discounts from publishers have normally been 50% off the established retail price, publishers can claw back margin even if they don’t get Apple to concede anything from the 30%.

So making this change, if it works, accomplishes three things for big publishers. The obvious two are that they gain a greater degree of control over ebook pricing than they ever had over print book pricing and they get to rewrite the supply chain splits of the consumer dollar.

But the third advantage for the big guys is the most devilish of all: they may gain a permanent edge over smaller players on ebook margins. That is one that, truth be known, was already playing out as Amazon used its leverage to reduce the share smaller publishers got from Kindle sales. But this could institutionalize it. (Slatkin)

Alleged illegal price-fixing is a matter of concern. Some independent and small publishers are up in arms about the “exclusive” arrangement, but whatever big publishers do is largely irrelevant to small publishers’ business. If big publishers want to keep their prices artificially high, let them. As long as they believe they exist in a vacuüm, their higher prices make indie books all that more competitive. They may make higher margins by controlling prices, but who knows the degree to which resulting lower sales volumes will dilute those gains?

Why do indie publishers care? Many believe they have joined the “fraternity of publishers” by leveraging the various distribution channels available to anyone at the click of a mouse. But even if they can muscle themselves into the room, they’ll be ushered to the “kid’s table” where they will not be privy to the conversations of the big players. Those party-crashers who sit around feeling excluded may form their theories about the actions and motivations of their “colleagues,” but they’re better off planning their own parties. Self-publishers generally have vastly lower risk exposure, invest in a tiny fraction of big publishers’ marketing expenses, generally lack access to physical book distribution networks (bookstores) and should correspondingly have lower expectations for volume sales. (Of course, there are notable exceptions).

Big publishers are fundamentally book investors who find products to capitalize and sell in volume through retail outlets. They watch the numbers to see where they can set their prices for highest profit. The majority of their books don’t make money—the profitable ones need to be real blockbusters to take up the slack—so, big publishers treat a broad array of book offerings as a sort of literary mutual fund where overall performance is key. Their prices are based on the simple business requirement of not being able to sustain their huge operations at a loss. The agency model is just business. Margin is profit.

Independent publishing is an entirely different endeavor. Most self-publishers lack the business awareness, time and capital to see a product successfully to market; it’s not a hobbyist’s task. Indie publishers’ prices and business requirements are fundamentally not related to the prices of traditionally published books. An even larger proportion of indie-published books fail to make money for any number of reasons but many independents produce works of meaning, importance and significance in spite of harboring little hope of turning a profit. Art has always transcended practical boundaries; indie publishers of fiction, poetry and literature need not concern themselves with comparisons to the business models of big publishing houses. Nonfiction writers can price their work according to the value of the solutions they offer to readers who need them. The price of anybody else’s work (other than works that compete directly to offer the same information), regardless of publisher, is irrelevant.

Independent publishers must accept the commissions imposed on them by retailers but they are free to price their eBooks any way they like and sell them anywhere they like. Amazon’s 30% eBook commission is a good deal when one considers the number of sales they facilitate, their listing of book reviews, the excellent searchability they provide and auxiliary services they offer such as author pages within their site. The 20% commission they earn on my own paper books is well below industry standards. These low seller commissions are an even better deal considering that as holders of their own publishing rights, indie publishers have complete freedom to choose to accept sellers’ terms or not. They are also free to retail eBooks directly through their own websites. Big publishers can’t; they are contractually obligated to their supply chain to act as wholesalers. In a world where middlemen are of decreasing value, it’s no wonder traditional publishers are aggressively “negotiating” new terms.

It all comes down to the principle of perceived value; if consumers believe big publisher’s high-priced eBooks are superior, let them pay more. But the rise of discount airlines, free VoIP telephone services and other low-priced competitors to many traditional businesses suggests fewer and fewer customers will pay more for phony brand name credibility.

If anything, new market conditions could drive eBook prices down in spite of Big Publishers’ efforts to keep them inflated. Millions of free eBooks are already available on Google Books. Small publishers should be more concerned about the possibility that eBooks will be commoditized in the same way music has. A “song” (now unceremoniously referred to as a “music download”)—whether it’s a professionally recorded and expertly engineered movement from a symphony or three minutes of screeching into a portable tape recorder—is worth a single dollar today. I’d hate to see the same thing happen to books. Ironically, it’s that same fear that’s driving Apple and the Big Six to prop the price ceiling up. The difference is that for big publishers, Amazon represents the next price tier down; it poses the most immediate threat. While big publishers (allegedly) collude with Apple to compete against Amazon’s Kindle, self-publishers must compete against Google’s mountain of free books, most of them created during a time when well-crafted writing and rigorous editing were standard publishing practices. Book prices may be kept artificially high through price-fixing or squeezed to a pittance between the competitive practices and free offerings of publishing giants, but at least independents are still free to price their work based on its costs to themselves and its value to their readers.

Fortunately for publishers of all sizes, the perceived value of Google’s offerings will likely remain low for the time being; people generally don’t value what they can get for free; almost none of Google’s out-of-print, public domain books are being actively marketed; readers must sift through a haystack of obsolete books to find the gems. It’s easier to jump online, read reviews of books others have read (some time during the past 75 years) and buy them cheaply. But this doesn’t negate the reality that Google Books is a treasure trove as much as the flood of books from small publishers is. As technology changes, making it easier and easier to search, buy and review books of all types, the winds of perceived value may change rapidly. As bookstores decline, Big Publishers will have no choice but to share a much more level playing field of online retail and distribution channels with their smaller competitors. Readers/customers will ultimately go where they perceive the relationship is most about them.