X
X
↓
Home→Self-Publishing→Verbs: Spice Up Your Writing with Verbs that Rock 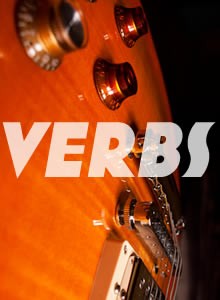 Verbs are the engines that move your writing and your readers, but many authors don’t spend enough time choosing the right ones. If your writing was an electric guitar, your verbs would be the volume, tone, and distortion controls that shape the music of your sentences.

Verbs of Being versus Verbs of Doing

One of the most common elements in boring writing is “static verbs”—verbs of being that substitute for stronger verbs of doing. The only thing these verbs do is assert existence—which is the most generic of actions. And too often, static verbs cling—like just-dried socks to a wool sweater—to prepositions like I, we, they, he, she, and it. Prepositions have their place, but use them consciously.

Constructs like those used above are fine for a rough draft, but use your word processor’s Find function to locate every static verb. Question whether to leave it or change it. There is no right way, except to make a conscious choice. It’s “autopilot” writing that will kill your prose, not the use or avoidance of a particular style. Moreover, the way you “fix” the above sentences will reveal your unique writer’s voice. Often, plugging in a better verb will only take you so far. Rewrite the sentence when needed. Convert bland factoids into powerful storytelling tools.

Participial verbs end in —ing. They tie your verbs to prepositions in an awkward three-legged race. They have an important place in your writing, but writers often misuse them.

But these speedbumps are unnecessary. Simpler tenses add clarity and directness.

Use participial forms when there is a change of state. Let the past tense action interrupt the participial action that came before it.

Participial verbs suck power out of lists of objectives. If you’re offering a course or writing a book, explaining its benefits to students and readers is standard marketing practice. Here’s a list of benefits associated with a workshop:

But though these takeaways are clear and simple, stating them this way is a missed marketing opportunity. These benefits can be stated as calls to action—the marketers favorite tool—by using imperative verbs.

Unless your list is very long (probably too long), consider using a different imperative verb for each item. Explore. Learn. Discover. Improve. Increase. In marketing talk, you are reframing the pitch to sell the benefits instead of the features. In storytelling parlance, you are selling the transformation instead of just tools for overcoming conflict. Implied is that the person on the receiving end of your message will end up doing something instead of just reading about it.

Come to Your Senses

Writing teachers encourage us to engage the mind and senses. Describe sights, smells, tastes, sounds, feelings, thoughts, and tactile experiences to appeal to the reader’s imagination on every possible level.

In concept, this is excellent advice. In practice, the advice often gets taken too literally. Think of “saw,” “heard,” “felt,” “tasted,” “smelled,” and “thought” as a special category of boring verb. Use them, but use them consciously and sparingly.

This advice can be expanded. Let the settings and objects in your scenes tell the story. Inanimate objects and places can rise, wave, beckon, impose, threaten, welcome, suggest, produce, radiate, and even speak. As always, balance is key. The transference of human thoughts and feelings onto inanimate objects should honor certain intuitive boundaries. Mountains might “call to” or “look down on” José or “rise” before him, but they shouldn’t “jump for joy” or “ask for his email address.”

Presumably, we already know José has been walking in the desert. The reader will assume that whatever you describe is what José sees.

Focus on describing the stimuli rather than on describing what Ben thinks about them. The italics reveal his reaction without having to tell the reader, “Here’s how he reacted.”

Again, the italics provide the character’s unspoken inner voice, but by adding an adjective (“uninspiring”) to describe the bills, the reader understands what provoked the reaction.

George’s reaction is a no-brainer. By emphasizing the stimulus (the scent) instead of the response, the reader will beat George to the hibachi.

Describe the perceived rather than the fact that it was perceived to draw readers directly into your characters’ experiences.

Addressing writing style patterns like static, participial, sensory, and imperative verb forms is one of the easiest and fastest ways to add music to your writing. With not much practice, you’ll learn to see style patterns as you write—which saves editing time. By searching for prepositions or instances of “ing,” with your word processor’s “Find” tool, you can quickly locate and consider whether or not to change potentially weak usages.

Learn more (did you catch my imperative verb) about writing style in my book, The Writer’s Guide to Powerful Prose.