X
X
↓
Home : The Singular They is Now Officially Correct 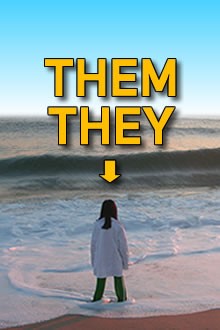 Find your favorite writer and give them this message: They no longer have to mire their writing down with awkward “his or her” and “he or she” and “he/she” usages. According to The Washington Post, the singular they/them has been adopted as officially correct English by over 200 linguists at the American Dialect Society. The Washington Post has already integrated the new rule into its style guide.

Traditionally, they and them have been plural, referring to groups of more than one person. When referring to one person of unknown gender, the generic masculine served well until feminists took issue with practice.

Speed bumps? No. You know those tire shredders they have at car rental facilities that prevent drivers of stolen cars from driving out the entrances? What a quandary! Is eviscerating our sentences truly a sign of respect for women? Good prose is music. This is noise. Some settling of contents occurs during shipping and handling. Not good.

The practice does sound a bit strange in certain situations:

Though the battalion commander is almost certainly male, roles have changed. Women serve in the military in combat positions. Would a female marine feel slighted by the generic masculine? I don’t know, but if she is, you’ve made one tough enemy.

Enter the singular “they” and “them” to solve the problem by circumventing the issue.

Language is a malleable and evolving thing. Casual speakers adopted this common “incorrect” usage years ago, probably because the “correct” one stinks. Opponents argue that they and them are plural words that specifically distinguish their subject groups from singular individuals. But logical inconsistencies abound in English. Shouldn’t it be:

If you’re writing formally or professionally, defer to your style guide for guidance on correct usage. The Chicago Manual of Style acknowledges the problem, but doesn’t quite bless the singular they—yet. MLA still says “pronouns should agree in number.” Beyond popular style guides, you’ll find no single, official authority that decides what constitutes correct English (and that’s probably a good thing), but the singular they appears to be a result of “the street” having rejected the awkward, unmusical solutions proposed by the grammar mafia. Now that the American Dialect Society is willing to back the practice, I’ll be joining the singular they revolution. After all, doesn’t every writer want their writing to feel good, sound good, and present no unintended offense?