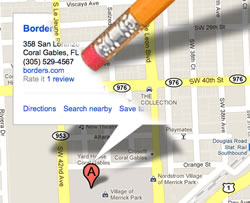 In the wake of Borders’ bankruptcy, I’ve read various theories about what led to the bookseller’s demise. Monday morning quarterbacking inevitably follows someone else’s failure; it’s easy to stand at the curb and analyze the tire tracks, but Borders’ crash had little to do with pilot error. In the span of a few years, books changed, publishing changed, printing changed and bookselling changed. Their time had simply come.

Some suggest eBook Readers were Borders’ undoing. Amazon has the Kindle; Barnes and Noble have the Nook; Borders never offered its own reader technology. Though I’m a paper book holdout, my own eBook offerings outsell my paper books by a ratio of ten-to-one. The jury is still out on what this ultimately says about eBook Reader devices, but physical, paper books are not the great retail product they once were. Whether or not your favorite bookseller offers an eReader, there’s little point in going to a bookstore to purchase eBooks to read on it. If a Barnes and Noble customer leaves one of their stores with a Nook in-hand, does she ever return?

Writers and publishers are abandoning ship as bookstores founder. For proof, one need look only as far as J.K. Rowling’s decision to market Harry Potter eBooks through Google’s online bookstore. The open ePub format used by Google can be read on almost any eReader technology (with the notable exception of Amazon’s Kindle). If you don’t own an eBook reader, you can read ePub eBook files on your computer or mobile device.  Google’s commission structure, especially for non-US sales, is generous. One has to ask what value a traditional retailer (or even a traditional publisher) could offer an author like Rowling who (admittedly because of her publisher’s original efforts) has already achieved her fame and following.

Easy availability of used books is another factor working against bookstores. I went into a local Borders to see what was available at their liquidation sale. Plenty of interesting $15 books were reduced to $10 but I left empty-handed. Why? I can buy those same books second-hand for nearly nothing. I’m not a book collector; I’m a reader. Why pay high prices for the privilege of converting new books into used books by reading them? A quick Internet search connects me to dozens of book dealers selling cheap used copies of any title I desire. In fact, many readers go to bookstores only to browse the inventory. Using their phones, they scan the bar codes of books to locate cheaper copies online.

Internet bookstores carry a vastly larger selection than their physical counterparts. The average big bookstore carries 80,000 books. That’s not the number of titles; it’s the number of actual books. Though that sounds like a lot of books, it’s only a tiny fraction of the million new titles published every year. Amazon has over 7.5 million unique titles in stock and they’re much easier to browse electronically than they are sitting spine-out on a shelf.

EBooks, the availability of used books and online distribution are only part of the business climate change faced by traditional booksellers. With cheap books a click away, the costs of parking and local sales tax alone stack the odds against brick and mortar stores but publishers are also evolving and changing.

Publishers traditionally print thousands of copies of a new book, distribute it to stores, promote the hell out of it and hope it sells. They must often sell over ten thousand copies to recoup their investment and make a profit (and I’ve heard figures as high as 30,000). Unsold books are either returned or destroyed at their expense. That’s a lot of risk (and it’s why a traditional publisher willing to take on your book can still be a valuable business partner).  But, when a book sells, the bookstore takes 50% of the cover price. That’s more than the author makes. It’s more than the publisher makes. Granted, bookstores have expenses, but they contribute nothing to the creative process and assume the least risk of anyone in the chain from writer to reader.

With fewer retail outlets for books, publishers are forced to embrace the changes and follow the lead of the independents. Print-on-demand (POD) has changed the paper book game. (POD is a printing technology not to be confused with vanity or subsidy publishing). As bookstore sales decline, Internet sales rise. Publishers are less willing to invest in expensive distribution and huge print-runs. They’re less willing to risk paying more for returns than they make in profits. With POD technology, each order results in the printing and shipping of a single book. Though profit-per-book is less, upfront costs and risks are negligible. As stores contribute less to the task of getting books into the hands of readers, publishers will be less willing to give them half their pie. The decision to print in volume and distribute to stores will eventually be made based on the results of Internet-only book launches where readers preorder books directly from publishers.

Bad news for bookstores is not all bad for books. A positive consequence of not having to print in volume is better looking books. Publishers are no longer compelled to pack tiny text onto pages with thin margins to save thirty pages per book over a print run of thousands. Though the cost-savings of that approach are obvious, if it costs an extra thirty cents to produce a single, beautiful, comfortably readable book, great design becomes a good value.

Between publishers and bookstores lie book distributors and the smart ones have noticed the changing climate. In fact, Ingram, one of the largest book distributors, owns Lightning Source, one of the foremost POD printers. Print with Lightning Source and your distribution costs are built into the price of production. Add to that the ability to set seller commissions as low as 20% and an invitation to sell through Amazon on those terms; there’s simply no way a traditional bookstore can compete. Distributors are wisely evolving into sophisticated printers with an already-established network of retail connections.

And distributors aren’t the only ones assuming new roles. Through CreateSpace, its self-publishing division, retail giant Amazon reverse-engineered the publishing process from the point of sale backward to include both POD printing and distribution to its competitors.

The fall of Borders is unfortunate but not the result of any great misstep. Though it’s easy to look for flaws in their approach, Borders’ business strategy worked for many years. Back when readers primarily bought paper books from bookstores, buying in volume meant better pricing and the benefits of centralized distribution. That model still works for chain restaurants, shipping companies and oil conglomerates, but it’s dead for bookstores. The climate has changed. In a world without Borders, it’s time for something new.