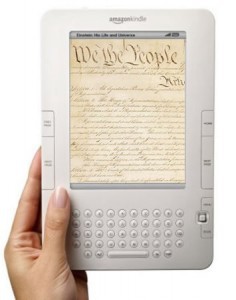 Sarah Houghton-Jan’s manifesto, The EBook Users’ Bill of Rights, has been circulating around the publishing blogosphere recently. I’m more or less in agreement with it, but wonder if it might not be failing to address some larger problems with how media are consumed in the 21st century.

The EBook Users’ Bill of Rights is reproduced below and followed by my comments. Feel free to contribute constructive comments and opinions.

The eBook User’s Bill of Rights

Every eBook user should have the following rights:

I believe in the free market of information and ideas.

Digital Rights Management (DRM), like a tariff, acts as a mechanism to inhibit this free exchange of ideas, literature, and information. Likewise, the current licensing arrangements mean that readers never possess ultimate control over their own personal reading material. These are not acceptable conditions for eBooks.

I am concerned about the future of access to literature and information in eBooks.  I ask readers, authors, publishers, retailers, librarians, software developers, and device manufacturers to support these eBook users’ rights.

These rights are yours.  Now it is your turn to take a stand.  To help spread the word, copy this entire post, add your own comments, remix it, and distribute it to others.  Blog it, Tweet it (#ebookrights), Facebook it, email it, and post it on a telephone pole.

To the extent possible under law, the person who associated CC0 with this work has waived all copyright and related or neighboring rights to this work.’

I think Sarah is dead-on in principle, but what’s missing from discussions about Digital Rights Management (DRM) and the rights of eBook consumers is a discussion of the role of publishers and how that impacts the definition of a “book” one might have rights pertaining to. Then there’s the larger matter of just who’s in charge of the hen house.

Back in the days of vinyl records, music was inseparable from the medium that contained it (much like a paper book). When cassettes (copy machines) came along, the industry wasn’t happy, but its profit model was protected; most listeners (readers) who cared enough about the content to buy their own wanted a higher-quality original pressing (printing).

When CD burners and the ability to duplicate, compress, reformat and restore audio files appeared, the music publishing industry met the challenge with lawsuits against anyone who refused to keep the music confined to its disc. Instead of practicing leadership in evolving the music industry towards treating their product as software, they cultivated ill will on the part of millions of listeners who responded by freely sharing billions of files (though that’s admittedly polarized. File sharers are copyright violators who can’t justify their actions by disliking the copyright holder). Another sad casualty of the record industry’s inability to change was album art. Originally a poster-sized 12×12-inch piece of culture, compact disc art shrank to a flaccid 5 1/4-inch insert and finally to an entirely neutered thumbnail image in your e-music store of choice. Anyone who grew up in the days of vinyl will remember how going to a record store was like visiting an art gallery—a blast of pop culture full of images as iconic as the Rolling Stones Sticky Fingers album with the real zipper on it and the prism on Pink Floyd’s Dark side of the Moon. In a world of noise and static where we’re only just awakening to the idea that effective marketing is actually entertaining, it’s a shame the music industry couldn’t think past their fundamentalist doctrine of legitimizing only music that came from their own factories. By focusing on enforcing imaginary rules about the relationship between a song and its manufactured container, music marketing left one of its legs standing at the curb.

Today, in the film world, we see countless reruns of that old Japanese classic: Return of The Son of BetaMax vs. VHS. You may recall the contemporary remake that bombed: HD-DVD vs. the Blue Ray? Blue Ray won the battle only to inherit a world where people increasingly preferred to stream movies. Having embraced the convenience, portability and decluttering effects of digital music, many refused to upgrade their old DVD hardware, waiting instead for visionless industry to slowly break down the sacred gate that blocked the marriage of their television screen to its natural partner, the wireless internet, and watching films on their computers in the meantime. Would-be heroes like Apple and Roku have stepped in to provide a wireless middle ground that connects your TV to particular streaming services, but the idea that a new $2000 wide-screen TV doesn’t come with a keyboard and a mouse and a chip that can power a web browser (like most cell phones can do) is a travesty. Cheap subscription services to Amazon Video, Netflix and iTunes keep consumers’ minds off the latest variation of the same old industry fustercluck: controlling how content is viewed and charging for channel access.

On to eBooks. It’s Kindle roaring through the straightaway, but what’s this? Nook is pulling up from behind and wait…it can’t be…Apple’s in the midfield again reinventing the course again. The book jockeys are faced with tough choices: Kindle, Apple, Kobo, Nook or Google? Predicting which horse the fans will be betting on this month is a tough call. Of course, you can bet on all the horses, but we know who’s really going to win. Meanwhile, all these eBook formats just stream the text into the reader; all the artistry is lost. A more visionary music industry would have found a better way to package the next evolution of its product. A more visionary publishing industry would have developed a more sophisticated digital book format capable of reproducing truer replicas of a real book than 1980s HTML bundled into a zip file and relabeled “ePub.”

Ironically, we’ve had computers on our desks for years that can manage hundreds of open and proprietary file formats, but our digital book libraries are tied to the vendor of our eReader hardware to ensure a long life of loyal and obedient compliance. Yes, you can read your kindle books on almost any generic device, but if you want to switch to Kobo or Nook, your library is toast. Ebook formats may not do much to reproduce the aesthetics of an engaging book, but for publishers, this model ensures that the old model of welding content to its storage medium can be leveraged against us.

To address the matter at hand—digital property rights—the discussion must free itself from the mythology that an eBook is a book. Like the streaming edition of The Wizard of Oz or an MP3 copy of Frank Zappas’ The Illinois Enema Bandit, the eBook version of DRM for Dummies is not a book or a film or a record; it’s a piece of software. The rights pertaining to publishing and consuming a piece of digital media are largely irrelevant to its tangible, physical counterpart. You may choose to call it an “eBook,” and you may digitally manipulate its contents to make it look like a real book; you may even offer it as a digital alternative to a paper book containing the same text, but when we start to believe our own hype, we’re no better than the big media publishers who believe theirs.

When it comes to defining property rights, an eBook is not a book. Nobody asks to borrow your copy of Microsoft Office. They might buy your license from you, but you can still cheat and keep a copy on your machine. It’s like touching your candle wick to my flame. I’m supposed to snuff mine when yours is lit? Yeah, right. We may believe the ability to simulate lending an eBook makes it that much more “booklike,” but software is not an inherently lendable commodity because unlike a book, it’s an inherently duplicatable commodity.

In this Brave New World, the idea that writers and other creators are entitled to make royalties from their content is fundamentally necessary. The idea that all people should have access to content in standard, functional formats is fundamentally good. But we need look no farther than the last two decades of the internet’s evolution to see a brilliant and functional world where content is sold, licensed and given away by individuals and publishers of all sizes and means. Open source projects mingle with commercial offerings in the great infostream. Each producer is free to define their own terms, formats, desired levels of security and technology strategy. The idea that writers and creators must choose a publisher, a distributor and a retailer is as much a lie as the notion that an eBook is a book.

Ultimately, we’re faced with choosing a rights management strategy that imposes the largely irrelevant rules of tangible books on a piece of software to the benefit of a publishing industry that refuses to recognize its own obsolescence, or we must stand on the equally shaky foundation of relying on end-users to voluntarily act responsibly and ethically with regard to how they consume and share a digital copy of an author’s work. Publishers and consumers are in the same boat, and both of its masts are rotten at the base

A better solution lies in a standardized, publicly-available rights management system and a standardized, well-conceived device-independent format for eBooks. Possibly, it could be managed by the copyright authority with which one registers one’s work and then coordinated internationally. Think of it like making your ISBN number more like a domain name that can be parked or attached to a creative work. As a web developer, I don’t have problems controlling who can see my clients’ content and I have many strategies for channeling or restricting its consumption. Why should an eBook be any different from a website? Certainly there are technical considerations related to hosted vs. downloaded material that are beyond the scope of this discussion, but the problem won’t get solved until consumers can be sheltered from the crossfire while big publishers battle to stay alive in a world where they’re no longer necessary.

There is a place in our world for big publishers, mega-retailers and proprietary formats, but while we debate the merits of a fundamentally sound eBook Users’ Bill of Rights (note the usage of “users’” rather than “readers’”), we must consider that as consumers, it is ultimately up to us to choose who is granted the authority to define, police and arbitrate them. Until a responsible choice is made, such discussions are no more useful than debate over whether you should purchase a Kindle or an iPad; they only distract us from realizing what we’ve already sold.