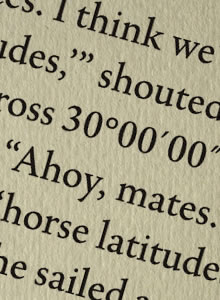 Writers often ask about the difference between “straight” or “dumb” quotation marks and traditional printers’ quotes, commonly referred to as “smart quotes” or “curly quotes.” Add in the need to distinguish between left single quotes and apostrophes, and the primes used to specify feet and inches or minutes and seconds and you end up with a typographic conundrum that confounds many a capable author. This article examines the various types of quotes and primes and explains how to use them.

Straight quotes evolved to facilitate informal writing situations. When typing into a discussion forum, twitter feed, or comment box, use your apostrophe and double-quote keys for all the special characters (except the “degrees” symbol.) “Dumb” text editors don’t try to figure out which direction to slant your punctuation. “Dumb” writers don’t have to go to the “insert special characters” dialog box or remember special key sequences for each type of mark.

Straight quotes make it quick and easy to express a thought. You don’t have to be a typographer to make yourself understood. In the right situations, “dumb quotes” are a smart idea.

The primes used to express latitude have transformed into single quotes, and the apostrophe in ’98 has become a single quote that faces the wrong direction. Writing on “autopilot” won’t cut it for every circumstance. Writers and editors must learn enough about typography to express themselves correctly. Here’s the desired result:

And this is one more reason a typesetter must go through the book block line-by-line, paragraph-by-paragraph: It’s the only way to find and repair typographic inaccuracies that can make a book appear amateur and unprofessional.

To make things easier, most word processors and typesetting programs have a “Special Characters” palette. Find the character you want and click to insert—easy. Otherwise, quotation marks and primes have “escape sequences” that allow you to insert them from your keyboard. 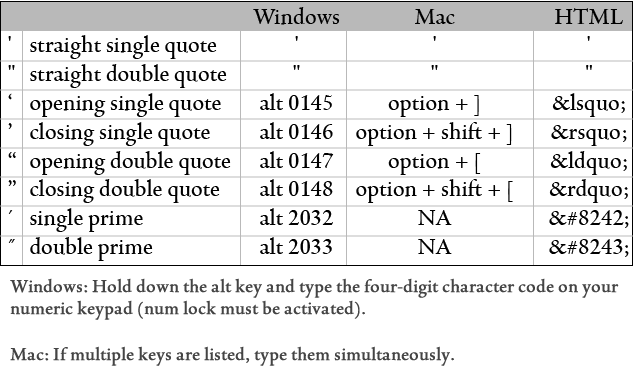 Book Design Basics: Turning Smart Quotes On and Off

The Preferences dialog in MS Word enables you toggle “smart quotes” and other features on and off. Take a look at these settings and decide which ones you want to use or you’ll tear your hair out trying to figure out why Word keeps changing everything you type. 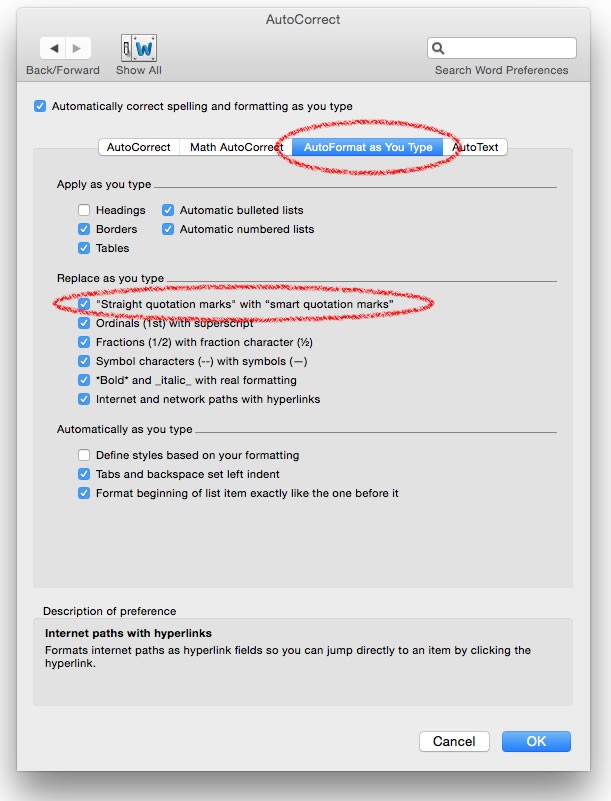 If you wrote your manuscript with smart quotation marks turned off, you may end up with straight quotes and apostrophes all through your book. This is easy to fix. Make sure “smart quotes” are turned on. Then perform two find and replace operations: Search for apostrophes/single quotes and replace them with the same. Then search for double quotes and replace them with double quotes. As the “replace” function “retypes” your characters, the “smart” quotation marks will be substituted for the straight ones.