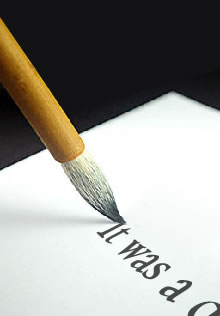 You can find the 25 most common pronouns here, but rather than create yet another rant about the subject, this post focuses on “we,” they,” “there,” and “it.”

Pronouns at the start of a sentence run the risk of being vague:

But in context, the same initial pronoun can avoid repetition and smooth out the prose. In this second example, the reader has no doubt about what “it” is.

And yet, we might look for an opportunity to substitute a detail or a synonym or a pinch of pepper for the pronoun. Can we insert a phrase that builds tension or supports a thread of the plot?

Certainly, use of the simple pronoun “it” is not wrong, and electing to use [it] is a perfectly valid writing choice. But when designing prose, search out each instance of “we,” they,” “there,” and “it.” Make a conscious decision about whether you want to use a pronoun or substitute some spice.

Pronouns have an unfortunate affinity for “generic” verbs:

Verbs like “was,” “are,” and “is” represent the most generic statements a writer can make about the status of a subject. If verbs like these were single, they’d advertise that they “like candle-lit dinners and walks on the beach.” They perform a functional role in a sentence by fulfilling the (loose) requirement that it contain a verb, but that’s about all they do apart from asserting existence and tense. When combined with a pronoun, generic verbs complete a perfect recipe for boring writing.

And now, we can use some playful verbs to characterize the freezer:

Let’s upgrade the rest of our verbs. Add an action, some conviction , some sensory input. Make the sentence more experiential.

Replacing the pronouns works as in the first example. Identify who or what is being represented and add details that enhance description or experience.

Certainly, good writing does not require every instance of a pronoun combined with a generic verb to be “fixed.” Sometimes, the pronoun and generic verb combination fulfill the simple role of converting a potent phrase into a sentence.

In Edward Bulwer-Lytton’s classic example, the only reason the pronoun and generic verb exist at all is because “dark and stormy night” wouldn’t be a proper sentence without them. Nevertheless, I would be tempted to open with, “A dark and stormy night.” and let the stalwart grammarians hang.

Steven Bauer says, “I wouldn’t call the verbs “generic”; they’re all forms of “to be” (or what we used to call “verbs of being”) and they are more or less like equal signs in math.  When they simply indicate descriptive conditions, they’re invaluable, but they quickly get boring simply because they denote stasis. In writing (in general, but particularly in narrative writing) doing trumps being. But part of the “design process” is having the taste to know when it’s inadvisable to translate the “is” construction into something “better,” which can also quickly become overwrought or fancy.  As the great Elmore Leonard said, ‘If it sounds like writing, I rewrite it.'”

Use your word processor’s “Find” function to track down common pronouns and “generic” verbs in your manuscript. If the process of inspecting every “it” or looking at every sentence in your manuscript that begins with “There” is laborious, you’ve probably overused these pronouns and will find the effort to be worthwhile. Evaluate whether the pronoun or the generic verb is simple and elegant, or a wasted opportunity to write something better. Whether creating images or prose, that conscious, aesthetic decision-making process is called “design.”