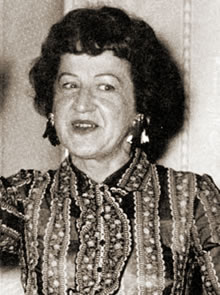 Here is the first of a series of occasional posts that explore the contributions of great typographers and typography books to the book designer’s art. Designers, writers and publishers will benefit from Beatrice Warde’s eloquent perspectives on the craft of typography, the power of type and the importance of the printed word.

Beatrice Warde – Excerpt from a Lecture to the British Typographers’ Guild

Imagine that you have before you a flagon of wine. You may choose your own favorite vintage for this imaginary demonstration, so that it be a deep shimmering crimson in color. You have two goblets before you. One is of solid gold, wrought in the most exquisite patterns. The other is of crystal-clear glass, thin as a bubble, and as transparent. Pour and drink; and according to your choice of goblet, I shall know whether or not you are a connoisseur of wine. For if you have no feelings about wine one way or the other, you will want the sensation of drinking the stuff out of a vessel that may have cost thousands of pounds; but if you are a member of that vanishing tribe, the amateurs of fine vintages, you will choose the crystal, because everything about it is calculated to reveal rather than to hide the beautiful thing which it was meant to contain.

Bear with me in this long-winded and fragrant metaphor; for you will find that almost all the virtues of the perfect wine-glass have a parallel in typography. There is the long, thin stem that obviates fingerprints on the bowl. Why? Because no cloud must come between your eyes and the fiery hearth of the liquid. Are not the margins on book pages similarly meant to obviate the necessity of fingering the type-pages? Again: The glass is colorless or at the most only faintly tinged in the bowl, because the connoisseur judges wine partly by its color and is impatient of anything that alters it. There are a thousand mannerisms in typography that are as impudent and arbitrary as putting port in tumblers of red or green glass! When a goblet has a base that looks too small for security, it does not matter how cleverly it is weighted; you feel nervous lest it should tip over. There are ways of setting lines of type which may work well enough, and yet keep the reader subconsciously worried by the fear of “doubling” lines, reading three words as one, and so forth.

Printing demands a humility of mind, for the lack of which many of the fine arts are even now floundering in self-conscious and maudlin experiments. There is nothing simple or dull in achieving the transparent page. Vulgar ostentation is twice as easy as discipline. When you realise that ugly typography never effaces itself, you will be able to capture beauty as the wise men capture happiness by aiming at something else. The “stunt typographer” learns the fickleness of rich men who hate to read. Not for them are long breaths held over serif and kern, they will not appreciate your splitting of hair-spaces. Nobody (save the other craftsmen) will appreciate half your skill. But you may spend endless years of happy experiment in devising that crystalline goblet which is worthy to hold the vintage of the human mind.

Warde also wrote and designed a famous Monotype broadsheet: This is a Printing Office (typeset by myself below in Eric Gill’s Perpetua typeface as Warde’s was because I could find no images of the original worth using ). 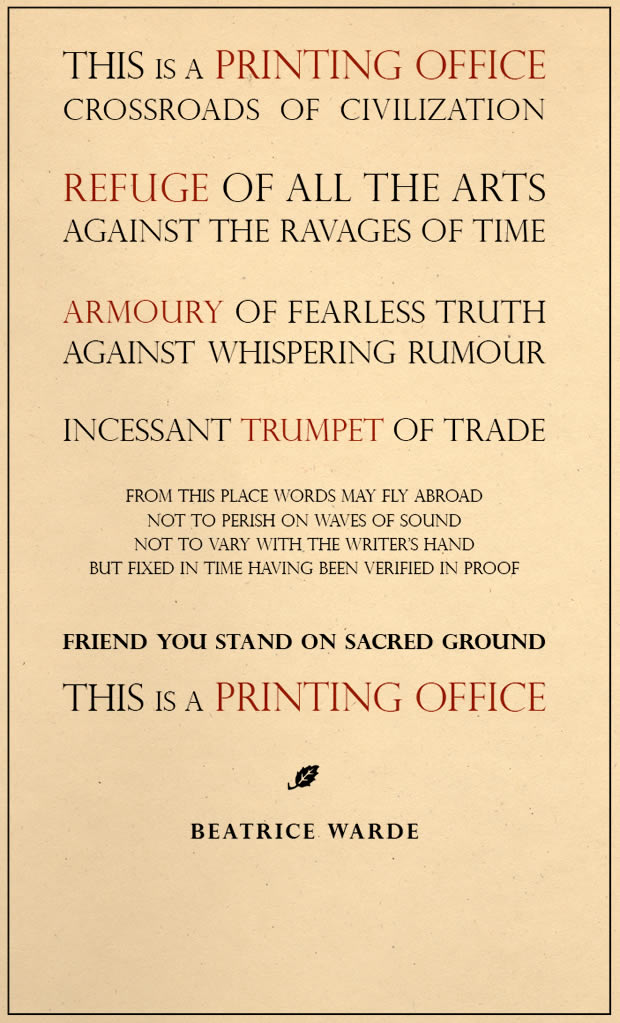 Beatrice Warde (September 20, 1900— September 16, 1969) was a typographer and educator. At the age of eleven she developed a love of calligraphy, and this grew in her college years to an interest in the history of letter forms. She became acquainted with Bruce Rogers, the typographer, and, on graduation was appointed to the post of assistant librarian to the American Type Founders Company. While there, she met eminent typographers including Daniel Berkeley Updike and Stanley Morison. She married Frederic Warde, a gifted typographic designer.

According to Alan Hutt, “She was an original typographical scholar of the first rank; she was a practicing typographer of sure taste and a calligrapher of elegance; for over 30 years she was a brilliant editor of the Recorder and the Monotype Newsletter, as part of her devoted service to The Monotype Corporation as its publicity manager; she was Stanley Morison’s inseparable and incomparable lieutenant in the great work of Britain’s typographical renaissance; she was beyond peer as a public expositor, and propagandist for, good typography.”

Special thanks to typographer Mike Chandler for introducing me to The Crystal Goblet.